As with the lower planks, the upper planks were then initially glued only at the transom and at the stem. Fitting the planks was fairly easy at the stern, but was a bit harder at the bow. There, the planks are hard to seat tightly against the stem since there is some overlap between the upper and lower planks.

This definitely took a lot of hand pressure and the use of medium CA glue since I couldn’t get a clamp onto the bow. I just had to hold the planks tight as long as possible until the glue set. At the stern, the planks were much easier to glue. But, I did run into one self-created problem that was actually less of a problem than I’d realized.

But, as it turns out, the top of the transom gets sanded flush with the top of the planks and later the whole section gets covered with planks right up agains that beam anyway, so you wouldn’t have been able to tell that the transom didn’t touch the edge of the beam, unless you looked up at it from underneath the boat.

With the planks secured in place, I then ran a thin bead of CA glue all along the inside of the joint between the upper and lower planks. Lots of clamps made sure that the planks were held properly together until the glue set. 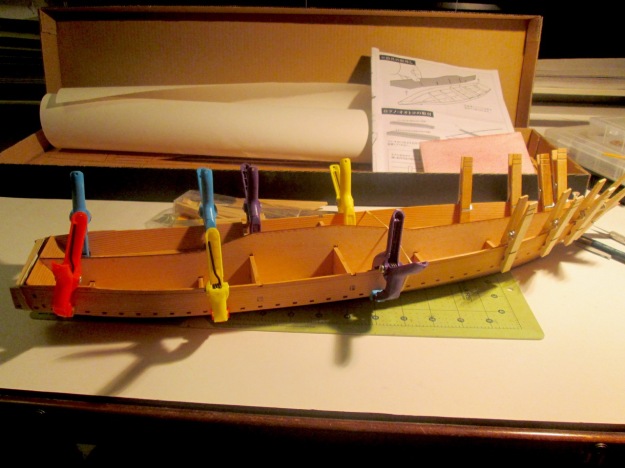 After a while, it was safe to then remove the temporary strong-back, which was a nice and satisfying milestone in the build.

With that, the basic hull is complete and we have something that now looks like a boat. There is still the outer stem to add as well as some stern trim that protects the ends of the planks, but aside from that, it’s pretty much time to start detailing.