The next sails to go on the model are the staysail and jib, the two triangular sails at the bow. To each, a length of line is attached at the top and bottom ends. At the top end, or head, is the halliard, while the line at the bottom corner, or tack, is the outhaul.

With these lines run through their respective blocks and temporarily secured using painter’s tape, the sail can then be secured to the stays, the fixed lines that support the mast from the bowsprit. I used a needle to help thread the line through the leading edge of the sail, then I tied a knot around the stay, securing the knot with a dab of Aleene’s Tacky Glue. When dried, the excess line can be trimmed away. Just be careful not to accidentally cut the stay itself.

END_OF_DOCUMENT_TOKEN_TO_BE_REPLACED

The booms have to have a single block attached to each, so that the line that controls the angle of the sail to the wind, the sheet, can run through it and through a sheet block attached at the deck. Meanwhile, the gaffs need a length of line with both ends attached to it. One end is attached near the end of the gaff, and the other end is attached about 1/3 of the way down the length of the gaff. Both booms and gaffs will need a small eyebolt attached near the jaws.

Before going on, I figured some people may need a bit of help with the nomenclature. Not wanting to post any more copyrighted material than necessary, I drew up a quick and simple diagram.

Sails of the ketch-rigged Dana. 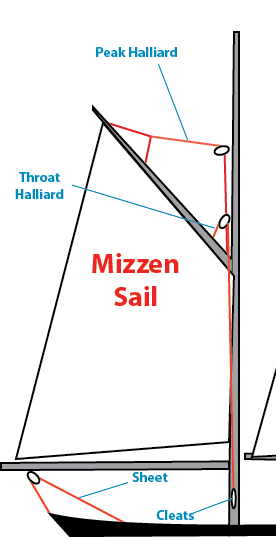 Diagram of lines of the Mizzen Sail. The Main Sail is similarly rigged.

END_OF_DOCUMENT_TOKEN_TO_BE_REPLACED

If you’ve been following my Billing Boats Dana Fishing Boat build, you’ve probably been waiting around for the past couple months for that 14th part. Well, I finally started writing it up and reviewing part 13 and realized that it was missing some information and needed some better organization.

As a result, I ended up re-writing part 13, and ended up covering all of the sail making work in that section. 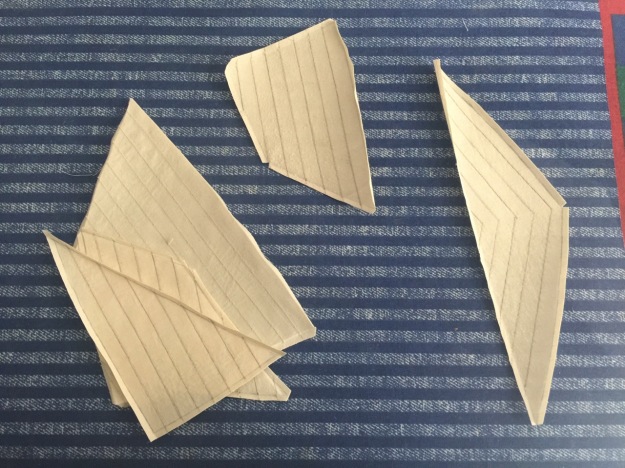 So, if you’ve been waiting for the next blog entry, you’ll want to go back and read the “new and improved” part 13. Here’s a direct link:

The simplest way to mount a block onto the sheet horse is to first tie the stropping line around the metal horse, then wrap it around the block and tie it off around the block. Remember that the sheave hole should be closest to the horse.

I took a slightly more complicated route, which is to take a line and loop it around the horse. Then, I made a simplified seizing, by using thread and tying a simple overhand double-knot. The knot is then slid down close to the horse to tighten the loup. A tiny dab of glue is applied to the knot to hold it in place. When dry, I can take the loose ends and make a loop, insert the block, and tie a simple overhand knot around the block. Below shows an example using a piece of wire to attach the block to.

END_OF_DOCUMENT_TOKEN_TO_BE_REPLACED

If you look carefully at the plans you will see a line that runs from the top of the mainmast, down to the rail, aft of the three shrouds. This is the topmast backstay.

I’m using the next smaller size rigging line for this – as a general rule, the higher up you go on the model, the smaller the rigging line gets, at least for the standing rigging. Below is a scan of the rigging diagram. I marked the line with a red arrow. 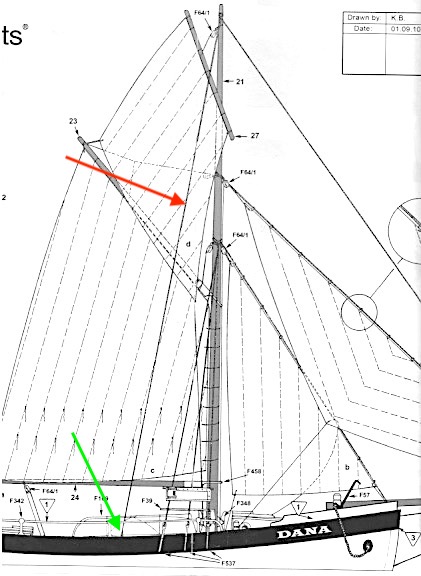 The green arrow shows the attachment point of the stay to the rail. I believe the kit would just have you simply drill a hole here and run the line through it and glue it into place. That’s perfectly fine, but I have been adding eyebolts to the model, so that’s what I’m doing here.

The rail was drilled through, the eyebolt inserted and glued into place. The excess stick through the bottom of the rail was trimmed off. All set to add the backstay itself.

I didn’t take any photos of the backstay at this point, as it’s such a simple operation. I just took a single piece of thin rigging line, made an overhand knot in the center, passing the loop over the top of the mast, then tightened the knot. The stays, port and starboard, were then tied off to their respective eyebolts.

When doing this, you want the stay to be taught, but not so much that you cause the mast to lean one way or the other. This may take a little practice. Fortunately, the stays attaching the topmast to the bowsprit will keep you from bending the topmast backwards. It’s mostly the left and right lean you want to watch out for.

END_OF_DOCUMENT_TOKEN_TO_BE_REPLACED

Before getting started, I should point out that rigging line gets fuzzy because of the short threads used. To minimize fuzziness, it helps to run the line through a piece of beeswax before using it. Now, this is where paying for this more expensive rigging line from Syren Ship Model Company comes in handy, it’s pre-waxed and fuzz free, so this was a task I didn’t need to deal with.

The lines that run from the end of the bowsprit back to the sides of the hull are the bowsprit guys. These are probably the easiest to install of all the standing rigging. I used the smaller sized rigging line for these. Attaching these required eyebolts near the tip of the bowsprit, as well as as below the rail, about an inch back from the bow. I simply knotted the line at the eyebolts and secured them with a touch of wood glue. 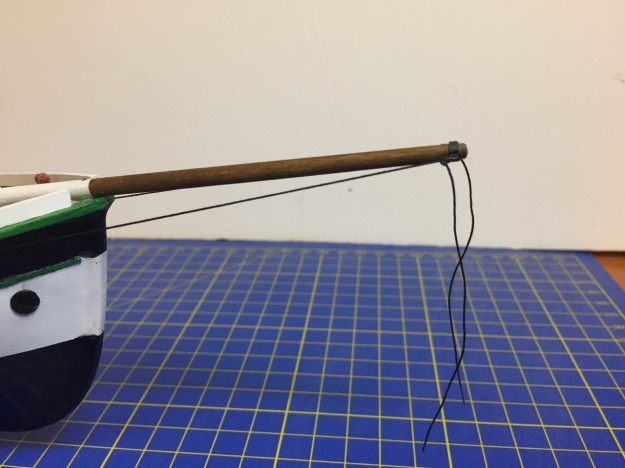 END_OF_DOCUMENT_TOKEN_TO_BE_REPLACED

Before I continue on with the rigging of the model, there is one more construction assembly to address. The railings on the Dana are made of brass wire, threaded through a hole in each of the brass stanchions. As I mentioned earlier, I painted the stanchions white, but I’m thinking to leave the rail itself bright brass. I haven’t made up my mind on this one. It’s probably easiest to paint them all white, and might be more accurate. Certainly, that’s what the kit instructions seem to show, and it looks good on the box art.

Now, it might be too early to install the rails just yet, as they may get in the way a bit while adding the shrouds and all. I could actually assemble the rails, getting everything bent to shape and all, and leave the final installation until later. However, I’m anxious to make some progress on the rigging and related fittings. So, I’m going ahead with adding some of the rigging detail. END_OF_DOCUMENT_TOKEN_TO_BE_REPLACED

Before going on, let me make sure to define the boat’s rig for those not familiar with some of the terms. As I mentioned before, the Dana is a ketch-rigged fishing boat. This means that it has two masts: a mainmast and a shorter mizzenmast. There are five sails shown with this kit. I’ve labeled them in the image below for those not familiar with the configuration or terms. 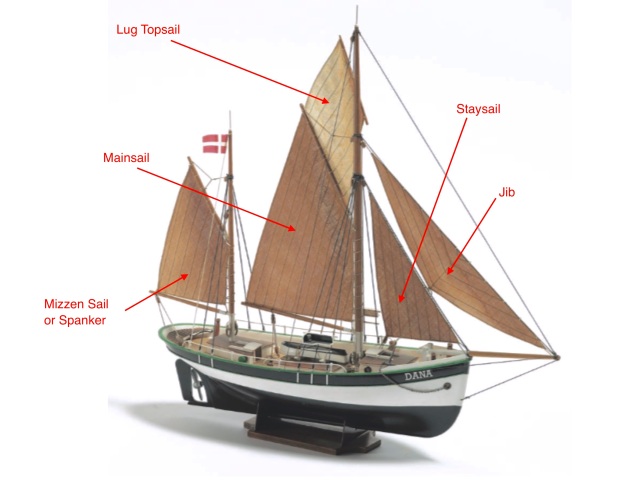 On the Dana, the horses are  metal bars on which slide sheet blocks. There are two of these on the Dana, one for the main sheet and one for the staysail sheet. You can find these illustration in diagrams E and H in the instructions. I’ve marked them with red arrows. END_OF_DOCUMENT_TOKEN_TO_BE_REPLACED

The stern platform is a plywood piece that fits against the bulwarks behind the tiller. Being that this is a fishing boat and that this platform is to be covered with thin wooden slats, I presume that this was used for the process of bringing aboard fishing nets. The wooden slats would allow the fisherman to stand on the platform as water drains into the channels between the slats.

Since the platform is supposed to be painted white and the wooden slats or battens are to be left a natural wood color, based on the model photos on the box and in the instruction booklet, it seemed to make the most sense to paint the platform before adding the slats. I did this before gluing the platform into place, leaving the addition of the wooden slats to be dealt with later.

Having glued the platform into place myself, I strongly advise placing a small wooden block under the platform. This can be temporarily placed or glued to the underside of the platform. In any case, trim it or sand it until the platform sits at a height and angle that will allow it to fit nicely against the stern. If this is glued on, you can probably just leave it as is or paint it a dark color, so it’s not noticeable under the platform. Another option is to add stanchions under the platform, which might be more correct.

In any case, I added mine using a technique that my old high school math teacher would refer to as “brute strength and awkwardness,” just using some tape and holding the part until the glue set. The process made enough of a mess that I had to do some paint touchup, but it worked out.

Adding the wooden slats wasn’t that hard. I simply used some contact cement, which will hold well enough given that these parts aren’t under any physical strain. I’m thinking I should touch each one also with a tiny drop of CA to lock them into place. Gluing on the painted surface of the platform isn’t ideal, but the paint is well bonded to the wood platform, and I think the glue will hold to the paint well enough. 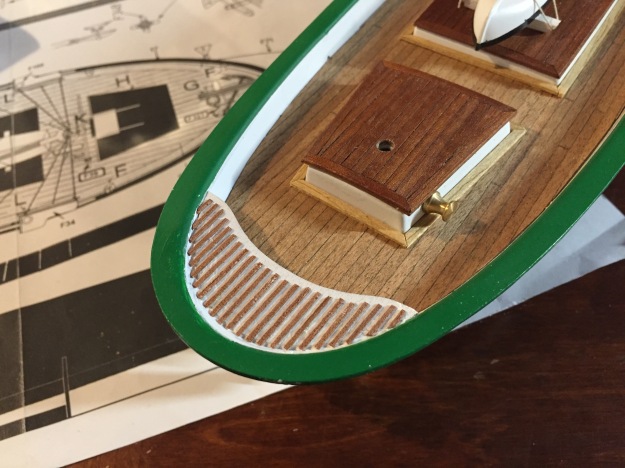 Ideally, the wooden slats should be a lot closer together, but this is about as good as I could get given the amount of wood remaining. The biggest problem for the kit modeler here is that I’ve never seen wood of this dimension on sale from Billing Boats or elsewhere. END_OF_DOCUMENT_TOKEN_TO_BE_REPLACED

At some point, we’re going to need to deal with one of the small details, namely the blocks. Billing Boats commonly includes pre-molded plastic block in many of their kits. I think they may use small wooden blocks for some things, but the blocks on this 1:60-scale kit come in plastic.

Now, you may not like plastic blocks and may want to substitute some 3rd party fittings instead.  The blocks in the kit are 3/16″ or 5mm single-sheave blocks. Amati makes 5mm single blocks in Walnut and you can find them at Ages of Sail here, at $2 for a pack of 20. Unfortunately, shipping far outweighs the cost of the blocks themselves. Not a problem if you’re already planning to order other things. But, personally, even though I have many choices of blocks on-hand, I just decided to try out the ones in the kit.

The blocks in the kit are molded in brown plastic. If you want to use them as-is, you can, but I decided to paint mine. I used Billing Boats tan for the wooden block, and Black, #11, for the stropping. Afterwards, I sprayed them with a dull cote lacquer finish. In the end, I think they look pretty decent. Anyway, I think they look good enough that once their rigged, you won’t really notice their plastic without looking really closely.

These are then set aside until needed. My kit had 12 blocks in it and it looks like 11 are needed to finish the kit. Now, given how easily I’ve lost blocks in the past, I strongly suggest keeping these safe in a small plastic parts box or zip lock bag or something until needed.