I recently completed the Hacchoro kit that I picked up last Summer. The final model is pretty big since it’s at 1/24th scale. It is based on the kit manufactured by Woody Joe of Japan with very little modification. You can see my review of the kit here.

The model went together very quickly and it was a very easy build as ship models go. It finished to a length of about 24″ and will make a very nice display piece in the home. It looks great up on the shelf with the sails and simple rigging and with the added detail of the oars. These are sculling oars, so they sweep back along the hull, giving the boat a very definite Japanese look of some kind of sea creature. 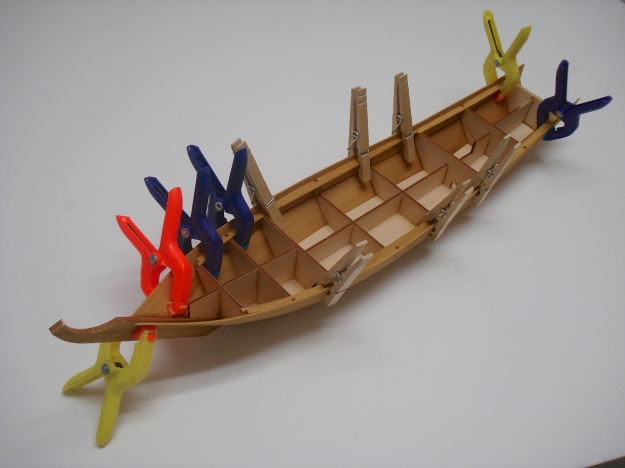 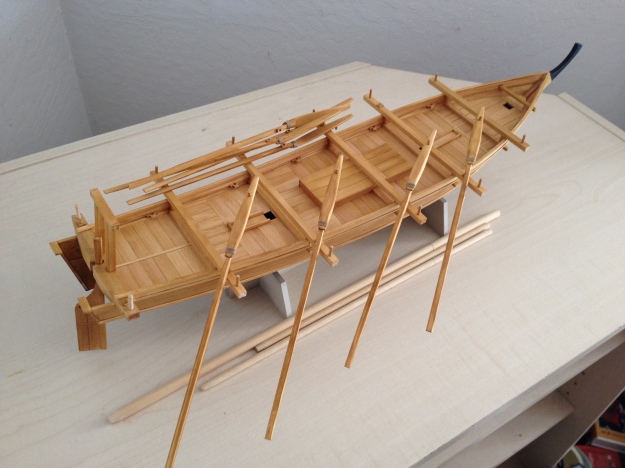 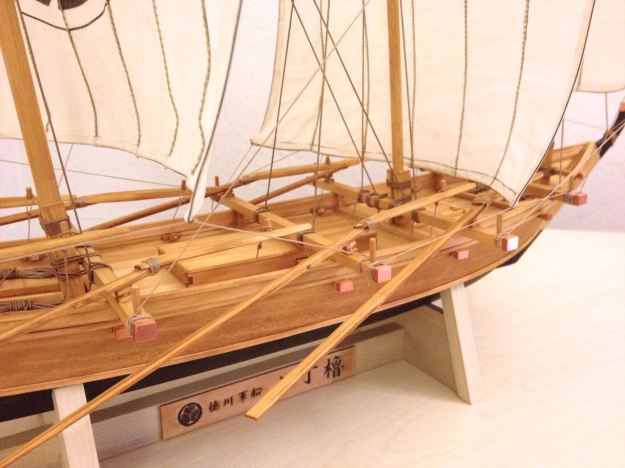 Basic details I modified were that I stitched the vertical seams in the sails on the sewing machine, reduced the width of the rudder, mounted the forward sail (Yaho) high and the midships sail (Nakaho) low to create an appearance closer to the Hacchoro I see in photos on the Internet. I also added rope coils at all the halliards.

It wasn’t exactly on my schedule of model projects, but I started it late last year with the intention of putting together my own construction guide. I had set it aside because of the need to get other things done. Then when an opportunity to display the Higaki Kaisen in San Francisco’s Japantown came up. The large display window and small size of that model motivated me to get the Hacchoro model done to add to that display. Construction was quick, but it did end up taking longer than anticipated. I’ve since added it to the Japantown display, but the display is only until April 3rd. That’s just over 2 weeks on display. Still, it’s better than leaving the Higaki Kaisen by itself. My hope is that after other scheduled displays are completed that I can put the Higaki Kaisen and Hacchoro back on display. But more about that at another time.

Some details that I didn’t include that I think should be there are anchors (Japanese anchors look like grappling hooks and boats usually carry several of them), a decorative tassel that hangs from the stem (I might still add one if I can make one that looks any good), a small paddle for maneuvering (this is a traditional paddle with a T-bar at the top), also maybe a water bucket and ladle. Also, this particular model doesn’t show the square notches in the planks where the iron nails were driven in and covered over with putty. On this boat, these would certainly have appeared on the transom and on the upper plank along the stem, looking like short dashed lines. Anyway, I’ll be saving these for a future model. This model was a lot of fun to build and I can almost guarantee that there will be another one in the near future. The design is simple enough that perhaps I’ll try scratch-building one by then.

Question: What’s wrong with this picture?

If you look at the photos of my Hacchoro model, you may realize that there is one terrible flaw. In my rush to get the project done and added to the display at the bank, I managed to mount the sails upside down! Two ways you can tell this. First, if you recognize the Tokugawa mon or family crest, it’s inverted. Second, the sails on this boat are different from most Western craft in that the sails are wider at the top than on the bottom. That is, they’re supposed to be wider at the top than on the bottom. On my model, they’re wider on the bottom.

I don’t attribute this at all to the instructions being in Japanese as there are plenty of photos that show the sails mounted the other way. I just should have paid closer attention.

FYI, I WILL be redoing the sails and rigging as soon as I get the model back from the bank at the end of the coming week. It’s a drag that I let this happen, but given the relatively simple rig, it won’t really take all that long to fix.

The Hacchoro with corrected sails!