Some great news for those of us who like to buy products from Japan, like Woody Joe kits and things: This Summer, after nearly a year of Covid lock-down,  Japan Post has begun allowing shipping to the United States again. In celebration, I bought a bunch of stuff from Zootoyz.jp that I don’t really need just yet! After a couple weeks, I received my first package from Japan in about a year.

No, there was no ship modeling stuff here in this order. Well, not exactly anyway. I did get a new Hishika Industries Super Fine Cut Saw to replace the one I’ve worn out. That’s something I do use with ship modeling. The rest is mostly to work on some very small scale (1/150) diorama ideas.

But, you’ll also notice two kits in the photo. These I got mostly to make and share with my 96 year old mother, who is now in a nursing facility. She doesn’t have much room for personal stuff, but she likes to look at these things, particularly if there are people in the model display. And, I’m hoping it jogs her memories a little. She probably doesn’t remember anymore that I’ve visited the Kaminari-mon (the small model) or Matsumoto Castle (the larger model).

So, yes, shipping from Japan is available again, however it is more expensive than it used to be, and it was already pretty pricey. But, in reality, shipping from Japan to the U.S. was still available, even during the lockdown, via a Japanese shipping company called Yamato Transport. In fact, I used the service last year to ship a small model to Japan last year. Shipping to Japan using Yamato is a little bit of work, as you have to find a convenient drop-off location. However, getting stuff from Japan is pretty easy, as their stuff apparently gets passed along to UPS to do the actual delivery.

And, actually, this is how the above items were shipped to me, as it was a little bit cheaper than EMS service via Japan Post, which is how I’d always gotten deliveries in the past. Still pricey, but nice to be able to do business again direct from Japan. Ω

There are a lot of Japanese products that are hard to obtain in the U.S. or elsewhere. Sometimes, you can find these items listed on Ebay or Amazon, but often you’re being charged a premium by sellers who figure that you aren’t willing or don’t know of other ways to obtain the goods.

In some cases, there may be international sellers with sites in English or whatever language you need. But, here’s an alternative service that lets you buy from Japan, even if the seller doesn’t ship overseas. The service is Tenso.com and it’s primarily a shipping agent that provides you with a Japanese address. Anything shipped to that address will be forwarded to you for the cost of shipping, plus a small fee. There is no charge to set up the account. You are only charged when you use it. This is also a great way to save money if you order from multiple sellers, as Tenso can hold your shipment for you for up to 30 days, and then send all your purchases at one time.

I set up an account for myself, but haven’t had a chance to use it yet. I had ordered something on Amazon.co.jp, the Japanese Amazon site, and the seller didn’t ship internationally. At the time, I asked a friend in Japan to forward the item to me. But, I don’t want to burden him with future purchases, so I’ll try using Tenso in the future.

Recently, Tenso teamed up with a service called Buyee.jp. This provides access to some large online sellers including Amazon Japan, an online store called Rakuten, Yahoo! Japan auctions, and more. So now, you can sign onto your Tenso account and shop these sites in English (I haven’t explored availability of other languages) and purchases will be sent right to Tenso to forward to you. This means that you have direct and easy access to tons of Japanese products that you would otherwise have to read Japanese to be able to order.

There is little or no fee charged by Buyee.com, but for a small fee, they can provide optional insurance and/or inspection service to make sure the item from the seller is in good condition before Tenso ships it to you. Probably not a bad idea and not very expensive for the extra service.

Those of you looking for Woody Joe kits or products from other Japanese manufacturers, this is a safe and easy way to shop, and you’ll be free from Ebay and Amazon.com price gougers. Note that Amazon.co.jp (Amazon Japan) is about as bad as Amazon.com when it comes to price gougers, so be mindful of retail pricing. But, prices on Rakuten look pretty normal though.

I thought I’d give the service a shot and I shopped on Rakuten for some inexpensive music books that I could use (I play Japanese shamisen). I wasn’t specifically looking for these. I just browsed using the categories provided on the website until I found something I could use.

The purchase was pretty easy. I noticed for these particular items there was a small Buyee fee until I added a few items, at which point, the fee dropped to zero. I don’t recall the exact circumstances, and I only bought about $30 worth of product, so I clearly didn’t have to deal with a large minimum purchase or large fees.

A couple days after the purchase, I received notification that the items arrived at the service and were ready to ship. I didn’t try adding multiple purchases and everything went through the Buyee interface and not my Tenso account interface, though I’m led to believe the services work together somehow.

I gave the go-ahead to ship the items using an express service called EMS, though you have an option to ship by other options including surface mail. In this case, the items were small, so there was little advantage in choosing slower surface shipping.

In a few short days, my order arrived in great condition! 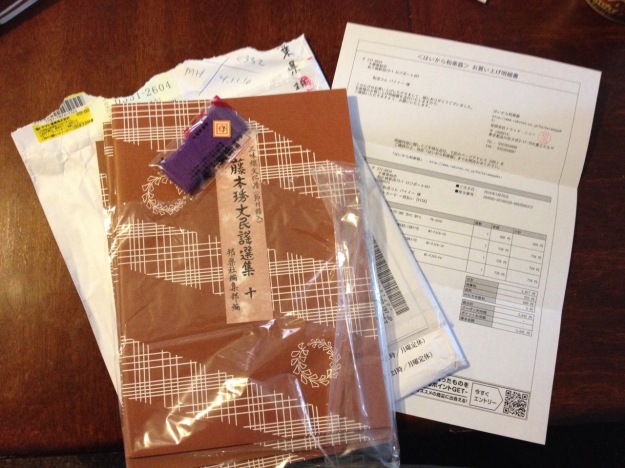 EMS is delivered by USPS and requires a signature – something I’m accustomed to whenever I order anything from Japan. I’m often not home when a delivery attempt is made and I usually just drive to the post office the next morning to get my stuff.

One thing I will comment about shipping via EMS. I’m amazed at how simply packages can be wrapped and arrive with no damage whatsoever. I ordered the Tosa Wasen kit from Japan, which comes in a fairly long and flat box. The only protection it had was that it was in one layer of bubblewrap and it was perfectly intact – not bent, crushed, or dented. Even the US Postal Service seems to take extra care with EMS shipments, though I may just luck out being so close to the International point of entry.

I’d love to hear what others have experience with EMS shipping.

In any case, the Tenso/Buyee experience was very good. I hope reading this makes it easier for you to purchase something you want from Japan. Ω