This week, I’ve been dealing with rigging on a Amati’s American galley gunboat kit, the Arrow, as they call it. It’s a small model with an enormous number of cleats that lines have to get tied off to. While working on this, I realized that some beginning ship modelers might appreciate knowing one of the techniques I’ve used for years. It’s nothing new, and I’m sure most ship modelers already know this, including beginners. But, just in case, I thought I’d mention it today.

When rigging a model, especially when belaying lines, tying them off, seizing them into place, etc., you want to make sure you’re lines are taught as you do it. The problem is that it’s hard to keep a line tight as you’re working on it. If you have really good manual dexterity, you might be allocate one finger to keep a line held down, while the rest of the fingers are busy securing the line into place. For those of us who aren’t gifted with such surgical grace, what to do? Everyone who’s rigged at least one model has some method they use and it may work quite well. I titled this post specifically about cross-clips that I really like for this job, but here are some ideas that I use, including the clips.

END_OF_DOCUMENT_TOKEN_TO_BE_REPLACED 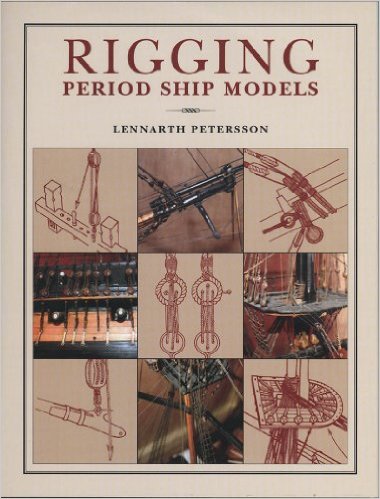 Just found out last week that Rigging Period Ship Models, the classic ship modeling book by Lennarth Petersson and published by the U.S. Naval Institute Press, is no longer “in stock” with the publisher. I hear that as meaning “out of print,” but that’s not how they put it. According to the person I spoke with at USNI, there is no official word as to whether or not they may do another printing or possibly a short run. But, apparently there are a lot of backorders for it, so maybe something will happen.

I noticed that the follow-up book, Rigging Period Fore-and-Aft Craft, is currently in soft cover form, while this book was in hardcover. Now, I’m wondering if they may be planning to go softcover with this one too, which would make sense.

Regardless, if you’re planning on getting this book eventually, I still see new copies available at normal prices, so you may want to get one sooner rather than later, unless you want to go the used book route or wait to see if there is a soft cover release.

If they do go with soft cover, it usually means a significantly lower price, so maybe this isn’t a bad thing for this book which otherwise lists at $46.