About a week ago, I ran across an article from the San Francisco Chronicle about the Manila galleons. It war of particular interest because the article by Carl Nolte mentions ship modeler and friend, the late Ed Von der Porten. The article included a nice photo of Ed displaying his then-under-construction model of the San Juan, a Basque whale ship, which is very similar to the Manila galleons. You can read the full content of the SF Chronicle article here.

The exact whereabouts of the now completed model are presently unknown to me, or the other members of the South Bay Model Shipwrights club, but it was last known to be on display at the  Sonoma County Museum. I’m hoping it’s still there, so I can see it again.

I did manage to get a nice photo of the model as it was displayed. The photo was taken by Ken Lum, who is currently the  vice-president of the South Bay Model Shipwrights club. 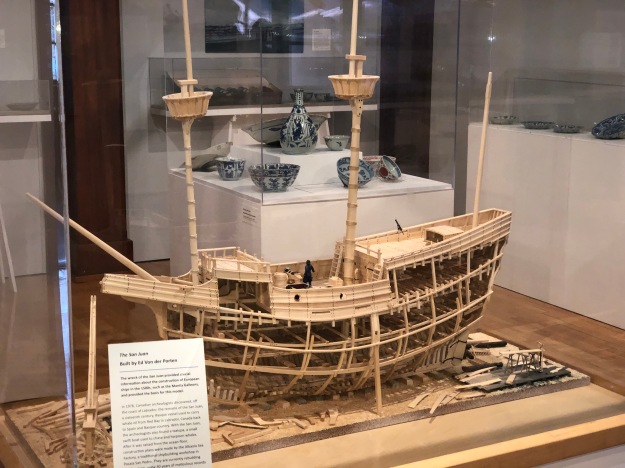 I dug around further and found a couple photos of my own of Ed and his San Juan model, including a nice close-up I took at one of the club South Bay Club Meetings.

We lost Ed in 2018, but he and his work are not forgotten, so it was nice to see the mention of him in the SF Chronicle article. Meanwhile, I’ll be doing to some follow-up work to see if I can locate his San Juan model. Ω