I would like all ship modelers to beware and understand the significance and impact of many kits that are appearing from a number of Chinese companies on the Internet.

The amount of work necessary to research and design ship model kits is a major part of the expense of producing good quality kits. It is unfortunate then that unscrupulous individuals and companies are stealing work that has been legitimately produced at great cost and expense, using the work to produce their own knockoff products and either making their kits more attractive by adding their own details, or undercutting the pricing of legitimate manufacturers, or both.

The problem is rampant, and many ship modelers are aware of what’s going on, but ignore the issue for their own benefit and to the detriment of the dedicated, legitimate ship modeling industry, and it is having an impact on the very companies that have built this industry. 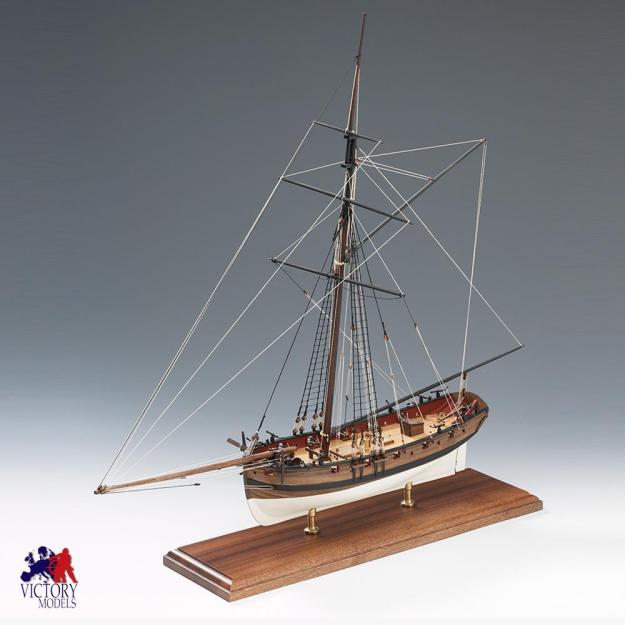 Amati/Victory Models kit of the English cutter Lady Nelson was designed by modeler Chris Watton. It is based on the lines of HMS Sherbourne. Recently, a Chinese company released an exact copy of this kit, same scale, adding a few of their own details. But they even went so far as to use photos of the Amati kit in their listings. They even copied the name Lady Nelson, a fictitious name used by Amati / Victory Models for this model.

Some of the piracy is a bit subtle, and in some cases involve the copying of kits that are no longer in production. Ever notice Chinese or even Russian sellers of the Harvey, a Baltimore clipper kit that was once produced by Artesania Latina?

Some of the piracy is so blatant, like the production of the Model Shipways kit of the US frigate Confederacy, to go so far as even providing photocopies of the original plans and instructions from the legitimate kit.

In other cases, these pirate companies produce some nice looking kits based on currently published books and plans, but these are produced without permission of the authors or publishers, with no licensing, effectively undermining the hard work produced by these individuals and the investments by these publishers. In the end, this only serves as a disincentive to those who might otherwise publish the next great book, plan or kit. Why bother if one of these unscrupulous companies is going to steal their work? And again, it only adds insult to injury that we or our fellow ship modelers should subsidize the downfall of this industry by knowingly purchasing these pirated products.

Hopefully, people will begin to understand the damage being done by these unscrupulous sellers and will stop supporting them before it’s too late.