With the completion of the rigging, followed by the creation of a new flag (see Making an American Flag Using Adobe Illustrator), I went on to add the finishing touch to my American galley gunboat model, which are the oars. It is a “galley” gunboat after all. The model is now complete, and I’m quite happy with the way it turned out, especially given that it took me years to finally get around to completing the model.

As a reminder, this was built from the American Gunboat Arrow kit produced by Amati Model of Italy. It is a roughly 1/55-scale wooden ship model measuring just under 19″ long. I bought the kit from Ages of Sail many years ago (2014!), partially built the hull, worked on it off and on, then set it aside until early 2021. Even with all my other projects in the works, I decided to make an effort to finish up this model before the end of this year, 2022.

Recently, I learned that at an NRG conference some years back, there was a presentation given by Kevin Crisman, a professor at Texas A&M, and expert on excavated ships of the War of 1812. Apparently, in this talk, he was discussing his findings on the American galley gunboat Allen, remnants of which were found in 1981. There was apparently some talk about similarities and differences of the Amati gunboat kit and the Allen. But, as I see it, the Amati kit doesn’t appear to be related to this find. It is a straight reproduction of the boat shown in the drawings reproduced by Howard Chapelle in his book The History of the American Sailing Navy.

Click on any image in the media gallery below to enlarge the images. 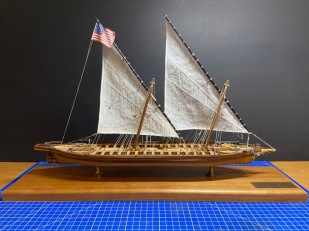 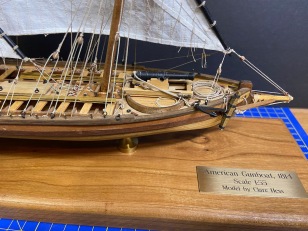