Ages of Sail recently added these two very nice looking fishing boat kits from Chris Watton’s Vanguard Models company. While these are only just now available from Ages of Sail, the kits were released a few months back.

Like the other kits from Vanguard Models, these two fishing boat kits are in 1/64 scale, and include laser-cut parts in pear wood and MDF, with the deck laser cut from fine grained maple, with all planking and treenails laser engraved.

These are apparently made for the beginning modeler, but experienced modelers will probably be able to do a lot of detailing with these exceptional looking kits.

Lately, it seems that Vanguard Models has been releasing new kits faster than we can stock them. The two newest kits to be released are a pair of 19th century fishing boats, the Nisha, a Brixham “Mumble Bee”, and the Erycina, a Plymouth Trawler. 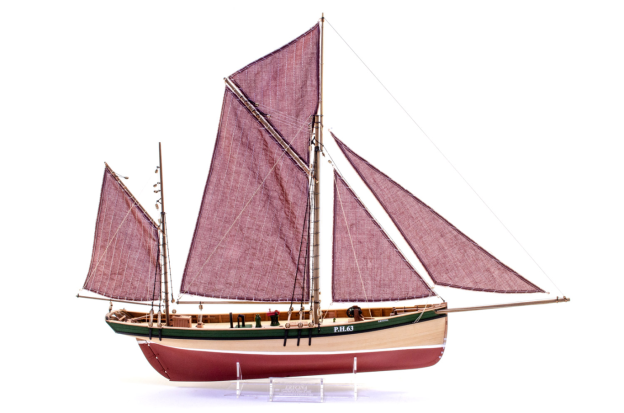 The Nisha, 1907 – The ‘Mumble Bee’ was cutter rigged, full bowed and broad beamed. They were strongly built and many survived to a good old age. Because of their fine lines, a few of these vessels were converted to yachts in their later life. Those fishing off the Welsh coast out of Tenby, working the fishing grounds in Mumbles Bay, acquired the collective term ‘Mumble-Bees’. In part, this was coined because of the large numbers of them ‘buzzing’ around the Mumbles like bees around a hive, and also arose by them adopting some of the features of the established Mumbles boats. Nisha had an…