I’m exited that my newest purchase from French publisher Ancre Books (Ancre.fr) arrived at the end of last week. I have other Ancre monographs, but this particular subject is simple enough that an actual model constructed from these plans might actually see the light of day here.

I was finally in a position to make the purchase, so in the middle of last month, I placed my order. Also, I’ve had to wait for a long time for this english language version to be released. It’s been out for a while now, but when it was released, buying it just wasn’t in the stars for me. Now, it is. 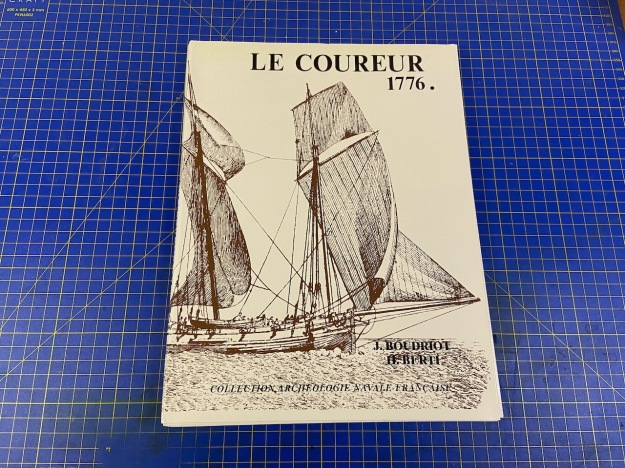 The history of Le Coureur’s is interesting, as she was accompanying the French ship La Belle Poule in 1778, when they engaged a pair of British ships during the American War of Independence.

According the Wikipedia she was “a French lugger that Jacques and Daniel Denys built at Dunkirk and launched on 8 May 1776.[1] Alert, under the command of Lieutenant William George Fairfax, engaged and captured her on 17 June 1778, in advance of the declaration of war.” The declaration of war being that between France and England.

This isn’t my first monograph from Ancre Books, so I pretty well knew what to expect. In the past, I’ve paid extra for tracked, expedited shipping. But, with how slow world shipping has been this past year with Covid and all, I figured I’d just order it using the less expensive option, which doesn’t actually provide tracking. Seems risky, but it’s one of the lower priced monographs, so I thought “What the heck. Let’s try it.”

I ordered this on the 19th of January and it arrived on the 11th of February. Given Ancre’s statement that shipping takes 15 to 60 days for foreign standard delivery (Livraison standard étranger), it was right on time – early, even.

I was a bit surprised when it arrived, because the package was thinner, and a lot lighter than I’d expected. The difference, it seems, is that Ancre no longer provides the customized hard cover that they had in the past. Instead, they provide a nice, printed, card stock folder that keeps everything nice and neatly together.

Below is an example of my copy of the monagraph of Le Cerf. As you can see, not only is there a specifically made hard cover, there’s a dust jacket as well.

Compare this to the new card stock folder that the monograph of Le Coureur arrived in, below.

Not nearly as fancy, and for the same price as the older version with the hard cover. However, the monograph is about the plans and text, not about the cover. While the hard cover was kind of nice, the folder is actually a lot more practical. It’s lighter, so it’s cheaper to ship, and cheaper to produce, so more of the money actually goes to the publisher.

Also, one of the issues I’ve always had with the hard cover monographs, is that there’s nothing to actually keep the contents from falling out the bottom when you pick it up. This folder solves that issue completely. Anway, it works, which is what really matters.

As with other monographs from Ancre, the plans and book are absolutely beautiful.

There are seven sheets of plans of various sizes, but all the drawings are provided at in 1/48 scale. The largest sheet is about 48″ wide and 36″ tall and provides a side profile detail with sails all well defined and detailed. The sheets are each folded to about 9″ x 12″, and each is an exact multiple of panels. In fact, all are one panel tall, or 12″ inches, except for the large one I just mentioned. The rest are all 2 to 4 panels wide. Here are all the measures:

The booklet is 60 pages and provides a nice discussion on the development of the lugger design, along with an explanation and notes on the drawings of Le Coureur. I particularly enjoyed reading the combat report by the captain of Le Coureur in his action versus the English cutter HMS Alert.

Overall, I really like this product and am happy to finally have the English edition in hand. The cost is 68€, which is about $77, plus shipping, which was about $9 for basic shipping.

If I finally can get a handle on all my projects, this would make a nice scratch project – I’ve always wanted to build something based on Ancre monograph plans, and this would be pretty ideal.

While I mentioning this, I should point out that I also have the AAMM plans of Le Coureur, as well as the drawing from Souvenirs de Marine Conservés. There are differences between those drawings and these. The authors state up front that they omitted details from the collections of the Musée de la Marine as those details were recorded much later in the ship’s career.

As I mentioned earlier, I’ve always liked the look of this ship, particularly with sails set. Mamoli and Shipyard both have kits of the ship. Mamoli’s is 1/54 scale, while Shipyard actually has two kits, one a laser-cut kit in 1/72 scale, and the other a 1/96-scale paper model kit. I have the latter, but never started it.

Mamoli kit (Dusek) showing waist netting, which was not present at the time she fought HMS Alert.

I suppose I should also mention that a Chinese company called CAF Model provides a well engineered plank-on-frame kit of the ship. I’m a bit hesitant to point out their work. It’s all technically on the up-and-up, I’m told, and the company is not on the NRGs or various model clubs’ blacklisted kit manufacturers to avoid, due to piracy issues. But, all their works are still so heavily based on the works of Ancre publications or the Anatomy of the Ship series of books, that mentioning them makes me a bit uncomfortable. I mean, they didn’t even bother to change the scale, and they initially were on the blacklist, as they were directly copying these plublished works without even asking for permission.

But, again, I’m told that they’ve since reached out to Ancre, and do reference them in their kits. Ancre may not care, since they are aiming their work at scratch modelers.

In any case, I’m very happy to have this latest addition to my ship modeling library. Of any of the Ancre products, this one is most likely to turn into an actual scratch modeling project that I will finish. While I’ve toyed with the idea of building a model of Le Coureur based on the drawings in the Souvenirs de Marine Conservés or the AAMM plans, these are more detailed and seem to better represent the ship as she served the French in 1778 as an American ally.

While a rigged 1/48-scale model will be quite large, the hull will only be around 19″ long, which is a nice size to construct. The plans don’t show full framing, just a sample of framing, but   provides ample cross-sections for building a nice plank-on-bulkhead model. Together with the 6 pages of construction notes and inspiring photos in Bernard Frölich’s excellent book The Art of Ship Modeling, another great Ancre publication, this may just turn into a real project and send me off to the world of scratch modeling again… Ω