I’m happy to announce the completion of my Shipyard laser-cut card model of the 14th century Bremen cog. The model kit is officially called Hanse Kogge von Bremen, 1380, and it is one of the newest kits from the Polish company.

Over the past few weeks, I’ve been putting a lot more effort into the build, dealing with the sail and rigging. I haven’t done much rigging in a while, so it was a bit of an effort to get back into it. Fortunately, with only one mast and one yardarm, the amount of rigging required is pretty small. Still, when seeing light at the end of the tunnel, every detail seemed to take longer and longer to complete. But, knowing that completion was near was great motivation to keep at it.

Yesterday, I made and added rope coils at all the belaying pins and cleats, when I realized there were a couple blocks hanging near the bow, unrigged – another bump in the road to that light at the end of the tunnel! Luckily, it didn’t take much effort to fix the situation. No one detail ever does. It’s just that sometimes there are just a heck of a lot more details left to go than you think.

I can’t really complain, though, as this has been quite a nice build, and unlike with most wooden kits, all the parts are pre-cut with the exception of the mast and yardarm, for which wooden dowels are provided that must be cut and shaped.

In any case, here is the completed model in all it’s glory…

The Hanse Kogge von Bremen, 1380, is just one of three cog kits that Shipyard produces as laser-cut card models. They recently released a special edition wooden version of the kit too, bringing the total number of wooden cog kits to three as well.

In any case, this was a great kit to build, and I hope other will build this or one of their other cog kits. These are fairly unique subjects in the world of model ship building, and it would be nice to see them get more attention. 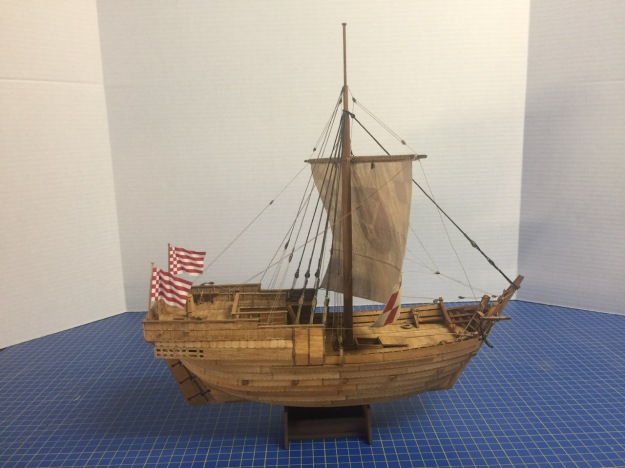