So, this past week, I’ve been having a few conversations with Mr. Paul Reck, who’s an accomplished ship modeler that runs the Hyde Street Pier Model Shipwrights club in San Francisco. I’ve been a member of that group for at least 10 or 11 years. Paul has been talking for some time about gunboats of the Jeffersonian navy. So, 1801 through the War of 1812. And, yes, that’s technically into the Madison presidency, but we’re talking about the gunboat navy that took shape under Jefferson.

Paul has built a model of the War of Independence gunboat Philadelphia and small galley cutter Lee. Lately, his attention turned to these Jeffersonian gunboats. This is something I’ve always had an interest in, though my knowledge doesn’t really go past a couple historical books on the War of 1812 and the Barbary Wars, and Howard Chapelle’s book History of the American Sailing Navy.

A number of years back, my interest did lead me to buy the only available kit of a Jeffersonian gunboat, Amati’s Arrow Gunboat kit. I’d started the model a long time back, but set it got set aside as many of my projects do. But, Paul has seen the model I was working on, and we talked about the boats many times over the years. But, the subject came up again recently, and it sounds like Paul is interested in moving ahead with a build of one of these boats. 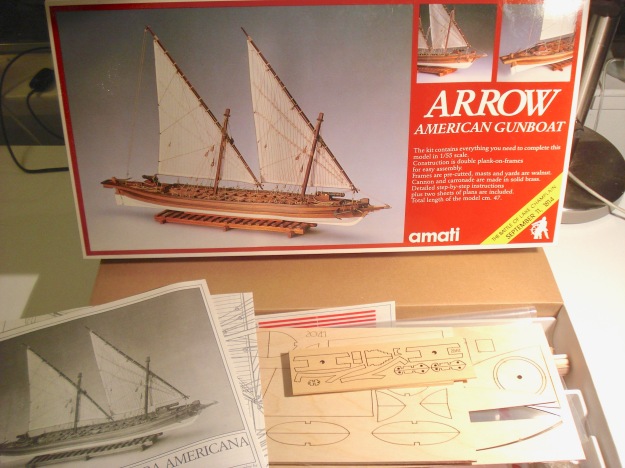 So, this last week, he and I have been back and forth on the phone about the subject, mostly discussing construction details, designs, and Amati kit. Paul was interesting in getting the kit plans, which are available for sale from Ages of Sail, which is just down the road from us. But, I happened to have a spare set of plans that I had no need for, so I mailed them to him.

As our discussions continued, I broke out the old Amati kit and looked it over again. The hull of the model is done and was at the stage where the rudder needed to be mounted and the masts and yards completed. Pretty much, all the other structural work was done and it needed be fitted out with thole pins, eye bolts, sails and rigging. Being so close to completion, and with all this talk about the gunboats, I decided it was time to finish up the model. So, I’m back on it, and I’ll publish some blog posts on the build soon.

Since I’ll be starting the blog in the middle of the build, I figure now may be a good time to re-do the way I post my build logs and record them. Up to now, I’ve been leaving everything as blog posts under a specific category. As a result, the builds are shown in reverse order, with the newest posts, naturally at the start.

I’m thinking I’ll continue with the blog posts, but I will then create build log pages that are better edited and complete, condensing all the posts into a more readable document. The blog posts will still exist, though I may use them in a more casual way, writing more about what I’m doing and what’s going on in ship modeling on a more regular basis, and less narrowly focussed on one single project, leaving the build log pages as the focussed source of construction information.

If you have any thoughts about this, feel free to leave me a comment below.

By the ways, if you’re interested in getting the kit plans, you can find them at Ages of Sail here. Or the whole kit here. Howard Chapelle’s book History of the American Sailing Navy, is out of print, but I recommend not spending $180 for a new copy! There were many copies of this book printed and you should be able to find them readily in used book stores for $10 to $20. Also, it’s good to note that all of the drawings done by Howard Chapelle are available for a small fee from The Smithsonian, commonly in 1/4″=1′ scale. Ω