It’s a happy day when a paper model kit shows up to give me back a taste of ship modeling again. Last week, my Dutch fluit model kit showed up in the mail and it didn’t take me long to open it up and get started.

As I mentioned before, family health matters have me stuck in the house where I grew up, with no trace of ship modeling material except text and images on the Internet. In order to give me back a small part of my absent ship modeling self, I ordered the paper model kit from Ages of Sail. I wasn’t quite sure if I wanted to build the Dutch fluit Schwarzer Rabe (Black Raven) or the Dutch pinnace Papegojan. Both paper model kits are available and in 1/96-scale. I ended up buying the Schwazer Rabe for about $38. But, looking back, I realized that there is a special edition set, The Opponents of the Battle of Oliwa, which contains both kits. Didn’t really matter though, as Ages of Sail, where I got my kit, doesn’t stock that particular product. But, it’s out there somewhere. 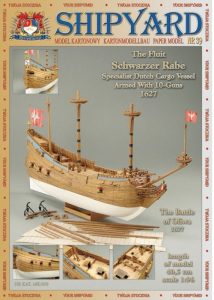 Anyway, the Schwarzer Rabe kit is plenty of project work for the duration. The kit was a little under $40 from Ages of Sail and can be purchased here. The kit is a 1/96-scale paper model kit from Shipyard of Poland, and measures just about 16″ when complete.

The kit comes with one sheet that provides a history and description of the ship, given in English, Polish, and German. The reverse side has “instructions” on the other side, but they’re really more of an outline of suggestions and tips. Also included is a laser-cut sheet of thick card stock, providing all the parts  for the framework. Two double-sided sheets provide some visual guide as to where all the parts go, but there is no real text to explain things. The cover sheet says there are supposed to be 11 sheets of parts and 11 sheets of instructions. If you include the small sheet of printed flags, then it does have 11 sheets of parts. However, the instructions are actually 5 sheets, double-sided, and one single-sided.

Sheets of parts to be cut out as needed

My Other Paper Model Builds

Having built their HMS Alert paper model kit, and having been working on the HMS Mercury paper model kit, I feel pretty comfortable with the instructions and parts provided. Also, I won’t rehash all the stuff from those build logs here, since so much of the construction of this model is really not much different from those. The Alert kit is complete, so if you’re interested in the construction of one of these kits from beginning to end, check it out here. 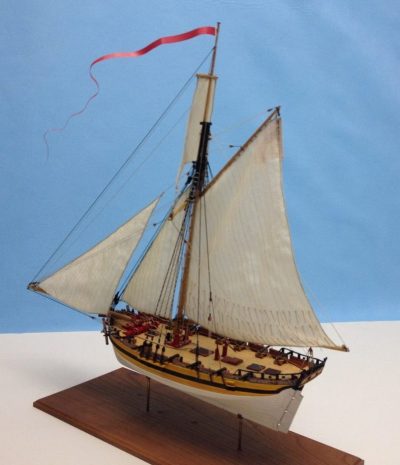 My HMS Mercury model is one I started afterwards, but mostly out of curiosity, so I haven’t been putting a lot of time into it, just working on it here and there. Mostly, I’m kind of afraid of screwing it up, as it’s actually looking pretty nice overall. I’m not that far along on it, but it is one of the larger paper model kits from Shipyard, so you might want to check out that build as well. You can find it here.

Back to the Schwarzer Rabe

Now, as for the Schwarzer Rabe, assembling the skeleton is very quick and easy. Some areas of the interior are to be painted black. There are also several interior deck pieces that have to be fit into place. But, generally speaking, unlike the HMS Mercury, this kit has no real interior areas to model.

The framework was done in a night. The next steps took longer, as the paper parts need to be built-up, mostly to a thickness of 0.5mm, though some parts require building up to 1mm. As with my other paper models, this was most easily accomplished by gluing together sheets of printer paper sprayed with 3M spray adhesive.

I used Aleene’s Tacky Glue and Titebond wood glue for the build. The Titebond sets up faster and dries harder, but as it may discolor printed parts, I tend to use Aleene’s for those.

I’m now in the process of adding the first “skin” of the model. This is a series of pieces that fill the empty space between the frames or bulkheads, and give the hull a kind of “solid” surface. The process is a bit slow going, but it’s giving me something to do that’s ship modeling related, and a little something to write about.

First covering layer going on at the bow

These deck pieces were the most troublesome to fit and took a bit of trimming and adjusting. Even so, there’s a gap at the centerline, but it shouldn’t really show much on the final model.

So, I’ll keep myself occupied for another few days with this kit. After that, I’m off to travel for about a week, then I’ll be returning home and will be looking forward to finishing up my Woody Joe Kitamaebune model, which you can read more about on my wasenmodeler.com site here, and to work on my Shipyard Bremen Cog laser-cut kit, which I’m about half way through, which are my models closest to completion. I’ll post about those when I get back home. Also, expect to hear about the OcCre Montañes part kit, which just arrived at my house yesterday. I’ll be looking forward to checking that out and I’m already anxious to write about it. Ω