A relatively simple Japanese boat is being modeled in 1/10 scale and is it coming along quickly. Here’s the first part of the build log of the Honryousen, a model of a 25-foot riverboat that was one of the recent projects worked on in Japan by boatbuilder Douglas Brooks. This boat was primarily used for fishing and for transporting gravel from dredging and construction projects in Niigata prefecture.

In 2019, boat builder Douglas Brooks had developed a project together with an organization called The Apprenticeshop, to go to Japan and build two traditional Japanese boats with two different Japanese boat builders. 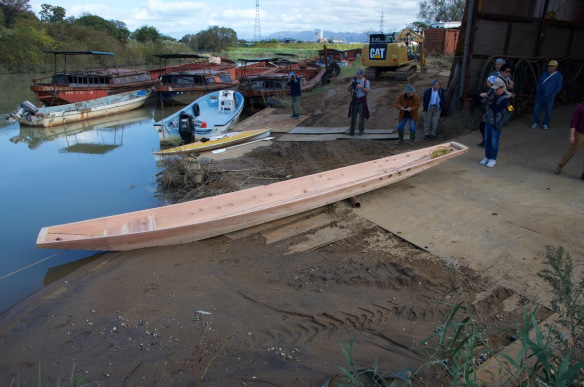 The Honryousen, or simply Honryou, is a riverboat built in a style called itaawase, which simply means “plank joined”. That the term refers to a boat built entirely of planks, including the bow and stern – basically one with no cutwater. While not exclusive to Niigata prefecture, this was very common on the rivers there.

The Honryousen that Douglas Brooks built with Mr. Nakagawa was dubbed “DNB Maru”, named for Douglas, and the two people from the Apprenticeshop that came with him to Japan, Nina Noah and…