The stern platform is a plywood piece that fits against the bulwarks behind the tiller. Being that this is a fishing boat and that this platform is to be covered with thin wooden slats, I presume that this was used for the process of bringing aboard fishing nets. The wooden slats would allow the fisherman to stand on the platform as water drains into the channels between the slats.

Since the platform is supposed to be painted white and the wooden slats or battens are to be left a natural wood color, based on the model photos on the box and in the instruction booklet, it seemed to make the most sense to paint the platform before adding the slats. I did this before gluing the platform into place, leaving the addition of the wooden slats to be dealt with later.

Having glued the platform into place myself, I strongly advise placing a small wooden block under the platform. This can be temporarily placed or glued to the underside of the platform. In any case, trim it or sand it until the platform sits at a height and angle that will allow it to fit nicely against the stern. If this is glued on, you can probably just leave it as is or paint it a dark color, so it’s not noticeable under the platform. Another option is to add stanchions under the platform, which might be more correct.

In any case, I added mine using a technique that my old high school math teacher would refer to as “brute strength and awkwardness,” just using some tape and holding the part until the glue set. The process made enough of a mess that I had to do some paint touchup, but it worked out.

Adding the wooden slats wasn’t that hard. I simply used some contact cement, which will hold well enough given that these parts aren’t under any physical strain. I’m thinking I should touch each one also with a tiny drop of CA to lock them into place. Gluing on the painted surface of the platform isn’t ideal, but the paint is well bonded to the wood platform, and I think the glue will hold to the paint well enough.

Ideally, the wooden slats should be a lot closer together, but this is about as good as I could get given the amount of wood remaining. The biggest problem for the kit modeler here is that I’ve never seen wood of this dimension on sale from Billing Boats or elsewhere.

I don’t know if this is the correct term, but there are six wooden posts that are to be shaped and mounted along the inside of the bulwarks. It’s not very clear how long to make these, but they should be tall enough to stick up above the bulwarks. These are used to secure various lines to including sheets and mooring lines.

The wood was a bit splintery, but I was able to make the six needed. Using a knife, I cut a groove about 1/8″ down from the top and then used a file to round the edges a bit. So that these would sit more upright when glued to the bulwarks, I cut a long taper in them. The parts were colored using Billing Boats mahogany stain and glued into place.

Near the bow, there is one set of bitts with a cross piece on which the bowsprit seats. The bitts were made similarly to the bollards, but using slightly larger wood. After gluing it all together, making sure that the bowsprit fit nicely in place, I drilled holes through all the joints and inserted tiny pieces of steel wire for strength. I also fit wire into the bottoms of the posts, which would fit into holes I drilled into the deck. I figured the extra strength would be needed, as the bitts will have pressure exerted on them by the bowsprit and rigging.

Similarly for the bowsprit, I drilled a hole down through it into the cross pieces of the bitts and fit the bowsprit with a piece of wire. Later, I’ll secure it onto the bitts. I plan to do something similar where the bowsprit rests on the hull of the ship. For now, I painted the cross bitts and glued them into place. 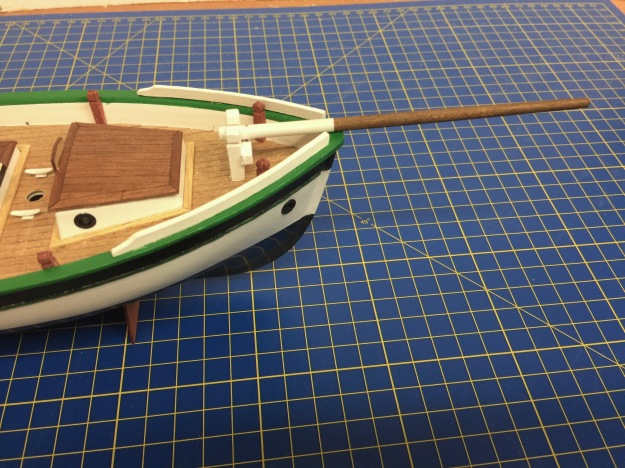 You may notice from the above photos that I also added the companionway doors to the forward and after deck houses. Adding these required notching the roofs so that the doors would rest flush against the cabin walls. I will be adding the companionway hatches later.

Finally, I worked on fitting the chainplates. As I mentioned in an earlier post, I’m running these right through the rail. This turned out to be a bit of a challenge, as I’d already painted the hull. My recommendation is to do all the drilling and cutting in the bulwarks railing before painting the hull, as it gives more freedom to nicely clean up the holes.

The holes for the chainplates needed to be rectangular to fit the flat brass pieces through. I first drilled holes for each one, determining their positions from the drawings and making sure to clear the scuppers I added, then I used a neat little “Micro Knife” that Micromark sells. for about $15 and includes four blades. I used their #61 blade, which was the perfect size for this task.

It was necessary to cut the holes close to the hull, so the chainplates could easily run straight down against the hull. Now, I had already painted the chainplates, but that was a mistake. In order to fit these into place, I had to shorten them and bend them slightly, so that they they fit nicely against the hull without force. Some of the paint came off in the process. Also, I filed the backs clean, so that they would adhere best to the hull. I fit the chainplates individually, and each one had to be bent slightly differently. I kept track of the positions of each one and gave one more coat of white paint.

At this point, I just set aside the actual attachment of the chainplates until after I finished some more of the deck details. However, since I was already drilling and cutting into the bulwarks rail, I went ahead and drilled holes for the handrail and stanchions, measuring the locations off the plans and locating the holes along the middle line of the bulwarks rail.

Next time, I’ll deal with the horses for the mainsail and staysail sheets and make the companionway hatches.