After painting the hull and adding the prop, I went ahead and decided that I didn’t like the position of the prop. Now, you may not care enough about it to want to change anything, but it was bugging me. Now, I may be wrong, but I’m glad I made the changes.

The prop points downward. On a real boat, this would drive the bow downwards, which may be the whole point. The boat may be more stable, operating with the bow not riding up above the water. But, the images of the completed model don’t seem to have the prop pointing down quite so much.

The main issue here is really that the shape of the rudder assembly prevents you from mounting the prop in a “nicer” fashion – the top of the prop hits the wooden frame. Really, all you need to do here is shave away enough of that frame to clear the prop when it’s mounted the way you want it.

If you build the kit straight out of the box, the prop points downward considerably.

Looking at Billing Boats instructions, you’ll need to trim the wooden frame to adjust angle of the prop. Test fit the prop as you go to see how much trimming you need to do.

If you haven’t added the rudder piece and prop yet, that’s great, it should be easy to cut or file the wooden piece the way you want it. If you’re like me and already added the pieces to the hull, you’ll need to be careful as you work. In my case, I used 5-minute epoxy to glue the rudder piece to the hull, so I had no problem with the piece coming loose as I worked with it. If you used CA glue, I suspect the glue joint will pop loose as you work it, so beware.

Now, I ended up having to reattach the prop, and I had cut off the wooden tab that it was glued to, so I glued a small piece of brass rod into the hole in the prop and fit it into a small hole I drilled for it.

Drilling the hole was the hardest part. If you want to do this, try to do it before the wooden rudder assembly is glued into place. It’s very hard to drill a hole from the slight angle necessary to clear the rudder itself. I managed to mar some of the paint, and without much damage to anything, but it was really tricky.

I ended up doing a little paint touch-up, which hides the scratches pretty well. But, you can see just a slight mark on the rudder from the side of the drill bit. Still, I’m pretty happy with the results.

The prop in its new position.

As long as I’m on the subject of an optional detail, like adjust the angle of the prop, let me mention another optional detail, that of the drain holes in the side of the ship called ‘scuppers’. All oceangoing boats have them of one style or another. On some, there are large openings in the bulwarks, to allow water to drain quickly from the decks. On many, there are a series of small drains.

For my model, I decided to add some small scuppers, three on each side. Again, this is optional. If you’re coming from the plastic modeling background, you’re probably into painting details. You’ll probably want to add these, so you can add appropriate water stains and rust streaks.

If you’re a beginning ship modeler and don’t really case, don’t worry. Just be aware that sailing types may ask you where the scuppers are.

Basic scuppers are really easy to add. All you need to do is find 3 points on the hull to drill holes for them. Drill from the inside of the bulwarks, right at the deck level, and downward at an angle, so that the drill comes out the side of the hull. It should come out just above that molding you glued onto the hull. 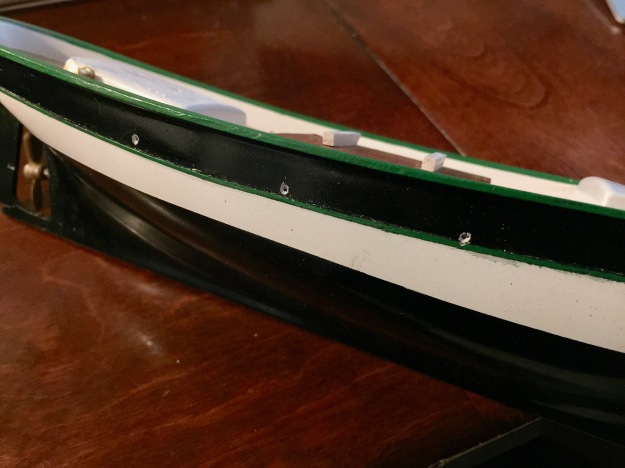 You might want to use a small round file to clean up the holes. There is also a tool called a broach that’s made for enlarging holes or smoothing them out. They come in sets. If you’re just starting out with model building, you probably don’t need the expense of investing in them. But,  at some point, you might be interested. I didn’t use them, but thinking about it now, I will probably invest in some. Ages of Sail carries a few sets of cutting broaches and smoothing broaches.

Note that at this point, I really haven’t gotten much beyond portions of Step D in the kit instructions. But, the instructions only go up through Step J, so I’m not really too far behind. I also tend to jump around a little, which you may want to as well.

For instance, I laid down coamings around each of the deck houses, and made their roofs all at once, whereas the instructions treat each of the deck houses one-at-a-time. Most of the time, I recommend sticking to the steps in order given, but this is a small model, and the details are pretty simple. Common sense should be a good guide.

Anyway, I just happened to notice that the instructions don’t ever show any steps where the railings are mounted. However, the written part tells you to do this pretty early in construction, even before the deck is planked. My common sense suggests to me that the railings will only be in the way if I add it too soon. So, I’m probably going to wait until at least the deck details are completed, before I add the railing.