Yes, I CAN finish a non-Japanese boat model!

Today, I just put the finishing touches on the Swedish Gunboat that I built from an Amati kit. For those interested it’s also called Cannoniera Svedese, and is listed as AM1550. To recap, this is a very inexpensive small model kit that measures about 13.5″ long when complete. It lists for $109 at Ages of Sail, where this one came from. There have been some challenges, but they’ve all been small ones. 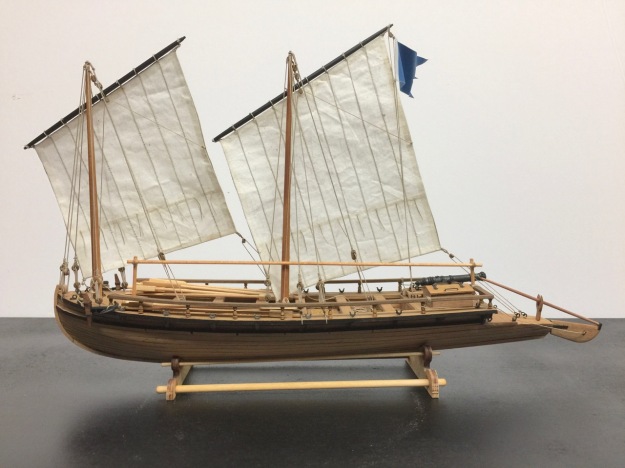 Most issues revolved around interpreting the single sheet instruction/plan combination, which is labeled in Italian, and figuring out the wood supply included in the kit, though the planking strips and the laser-cut parts are very clear.

I made a few modifications based on what historical information that I could find on the Internet and some personal views of practicality, etc. For instance, I replaced the kit flag with one I printed in color on paper using some artwork I found online. I would have used the kit flag, but I found the material kept wanting to flatten out, even after I worked to put some natural bends in it.

In making the paper flag, I found a corrected flag for Sweden’s archipelago fleet, which has a similar shape to the one in the kit, but is solid blue in color instead of blue with a yellow cross. The blue flag was in use from 1761 to 1813, and its history was detailed in a nice Wikipedia entry.

I rigged the model using line from Syren Ship Model Company. However, I chose to use the included Amati blocks and deadeyes. I tried to impart something of a billowing effect to the sails, but in tying the tacks and sheets, I managed to pull all the “billow” out.

The final model turned out much better than I was expecting, and it was nice to work on an historically interesting wooden ship model kit (or boat model kit, in this case) that didn’t take years to build. 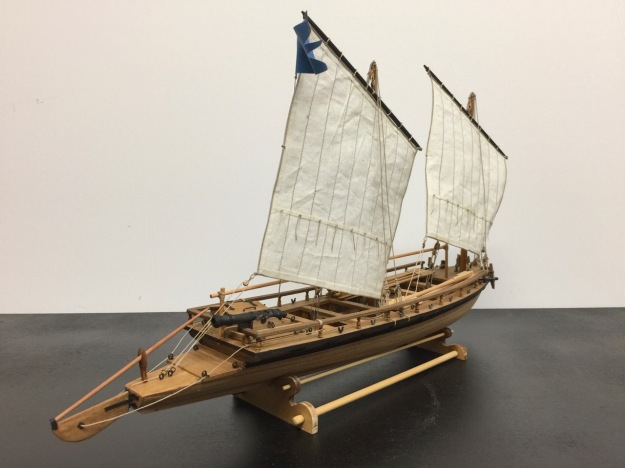