Before I can put too much of the interior detail into place, I really need to add the cannon carriages and probably the gun tackle too. The main reason is that if I am going to add any amount of gun tackle, I need some room to add ringbolts and blocks and such in the tight confines of the model’s interior. This will be more difficult if I try to do this after adding other interior furnishings. 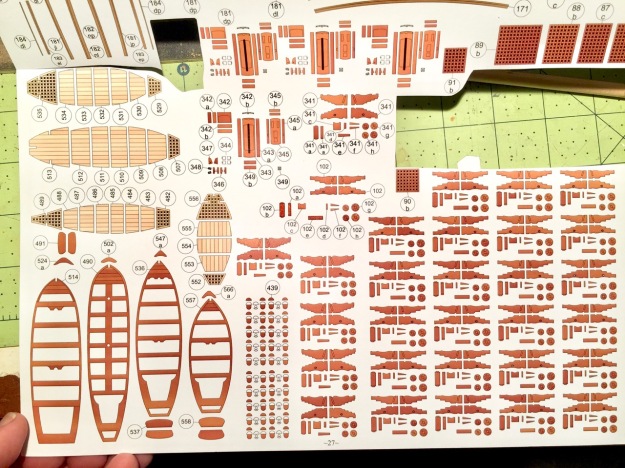 Now, if I built this as a real dockyard scene with launch flags flying, as I’ve been considering, the cannons wouldn’t be on the model at all, as this was something done after launching. Of course, I could take some artistic license and create the launch scene, even if I do add cannons.

I’m still a little torn about the whole idea of the dockyard scene, because it feels a little like cheating since I’d be avoiding all the masting and rigging. But, I’ve seen some beautiful models built in this style. And who’s to say that I won’t build a fully rigged paper model next time? Yes, of course I’m rationalizing.

In any case, I think I’ve decided that I’ll add the cannons regardless of the final model type. I can go ahead and get started on the carriages first. I will then give some thought to the barrels and the gun tackle. I think it’s common to build a ship model where the cannons have no tackle or just the breech ropes rigged. But, a serious ship modeler would  most certainly fully rig the cannons, and I expect I will do just that.

And the barrels? I used brass cannon barrels on my HMS Alert model, which look absolutely great, but I may just put some effort into making them out of paper this time. Anyway, I don’t know of good sources of small enough pre-made carronade barrels, of which I’ll need several for the quarter deck. But, first things first. Time to make carriages.

The task of cutting all the parts to make good looking gun carriages can be quite intimidating, particularly the trucks or wheels. Luckily, this step is simplified by the fact that the GPM HMS Mercury Details set I bought includes all the gun carriage parts all neatly laser cut. 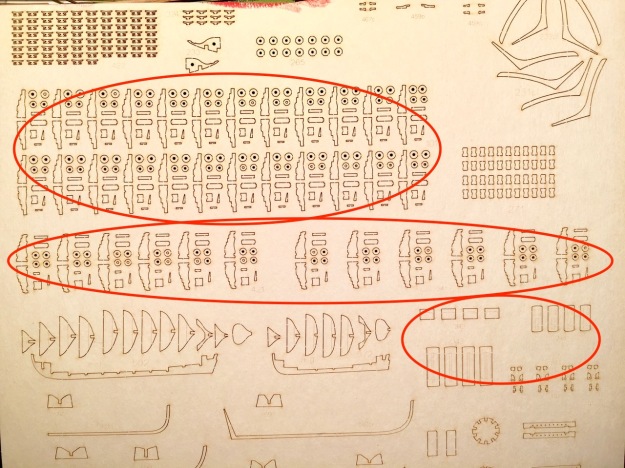 Laser-cut gun carriage parts from the GPM Laser-Cut Details set. Gun-deck carriages at top, quarterdeck and forecastle deck carriages in the middle and carronade pivot mounts at the lower right.

I’ve generally been pre-painting the laser-cut parts before removing them from the sheets. The Shipyard printed parts are a natural wood brown color, but if you look at a lot of dockyard models the gun carriages are most commonly painted red, and this is the way I’ve decided to go with this model. It’s easy enough to choose the desired color since the laser-cut parts need to be painted anyway.

By the way, in David Antscherl’s book The Royal Navy Fireship Comet of 1783, there are some nice color photos of his model. It’s a wooden model, but it is in many ways very close in appearance to HMS Mercury, particularly the color scheme and decorative artwork. The ships were built within a few years of each other, so I am using his work as a guide for how I want my model to look. If you’re interested in the book, which is about scratch building a wooden model of HMS Comet, and includes 6 sheets of plans, it is available from Seawatch Books. 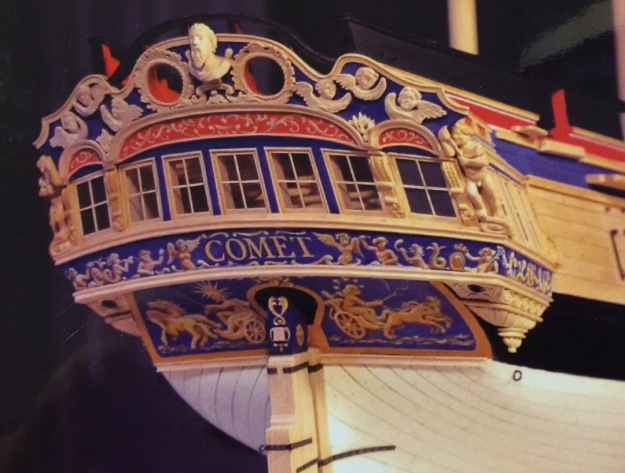 Photo from David Antscherl’s book on building the Fireship Comet, 1783

I painted the carriages using Renesans brand acrylics from Poland, specifically the Renesans Colour 08, Cynober (Cinnabar). I’ve written about my hunt for this line of paints in another post. As an alternative, I had initially tried to use Blick Matt Acrylics, Deep Red, but it was just a tad darker than I wanted. My desire was to match the color of the printed bulwarks as closely as possible, and the Renesans paint is a better match. 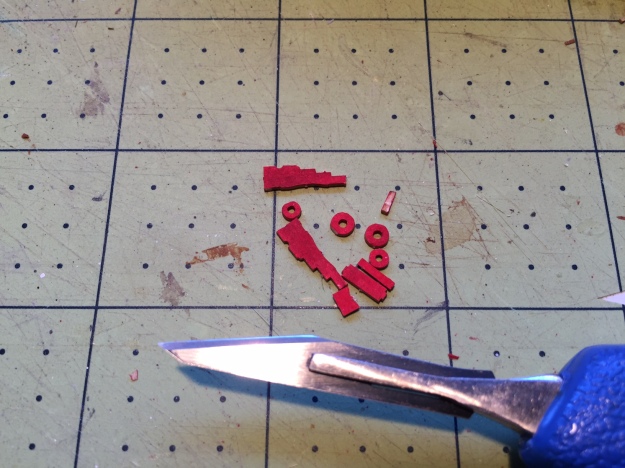 All the parts of a gun carriage, painted, and cut free from the laser-cut sheet. 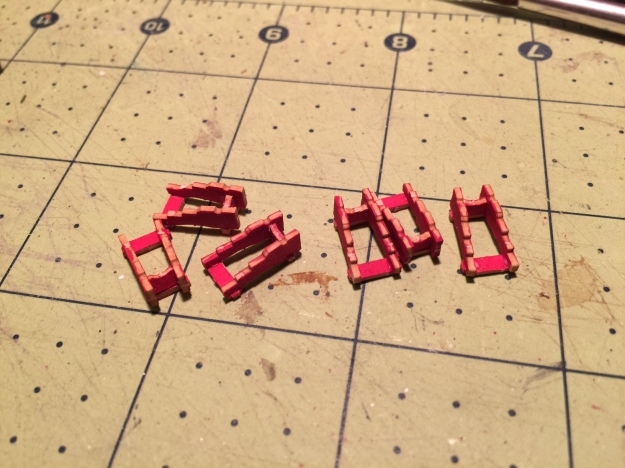 Basic carriages assembled. No trucks or quoin beds yet.

Since I painted the parts before assembly, once the carriages are completed, I’ll have to go over them one more time to color the edges. Also, I’m going to try a little gloss medium in the final paint coat to make them less dead flat.