The 1/96-scale HMS Mercury paper model continues. Since my last posting on the subject, I’ve been considering posting a little more regularly to the build logs on this site. I’ve traditionally posted in more regularly on major ship modeling forums and posted larger summaries here. But, for various reasons, I think it makes more sense for me to post more details here.

We’ll see how it goes. It would mean more frequent, probably shorter posts. I just don’t want to overwhelm my blog here with a lot of small posts that aren’t of particular interest to all visitors. I may have to reorganize this site a little, so that build log posts aren’t part of the main stream of posts on this site. Everything is a work in progress…

Having some interior detail is one of the interesting aspects of these Shipyard brand kits. I don’t know if I’ll be using all of the interior furnishings, but certainly want to include the major ones, even though these will be extremely difficult to ever see inside the completed model.

I built the stove straight from the kit, with a few modifications. I don’t know how the stoves external gear functions, but there is a what looks like a chain driven mechanism, apparently for turning a spit. The chain drive was printed on paper, two gears and the connecting chain, and it was just too hard to cut out as a single piece. So, instead, I cut the gears out and then just added wire to represent the chain. I also used a heavier piece of wire for the external axle.

All this being done, I should mention that, to the best of my knowledge, the Brodie Stove didn’t appear until 1781. That would be fine for the late configuration color scheme included in this kit. But, the earlier color scheme, which I am strongly considering, is from 1778, at which time a brick hearth would probably have been more appropriate here.

A wood ship modeler has a nice website about his build of the sloop of war HMS Fly in which he discussed the Brodie stove, including research documents. Here’s a link: http://www.hmsfly.com/brodieGalleyStove.html

Here’s an update on some of the furnishings of the great cabin. Because I’m using an aftermarket upgrade kit from GPM for the stern and quarter gallery lights, the interior should be visible. That gives more incentive to adding furnishings in the great cabin.

The kit provides a table, a settee, four chairs, and a chest of drawers. I decided that the captain also had a painting hanging on the partition wall. I found a Van de Veldt in a gold colored frame and printed a copy in miniature. I also printed a portrait of King George III, but decided that was a bit much, so I’m just using the Van de Veldt painting. 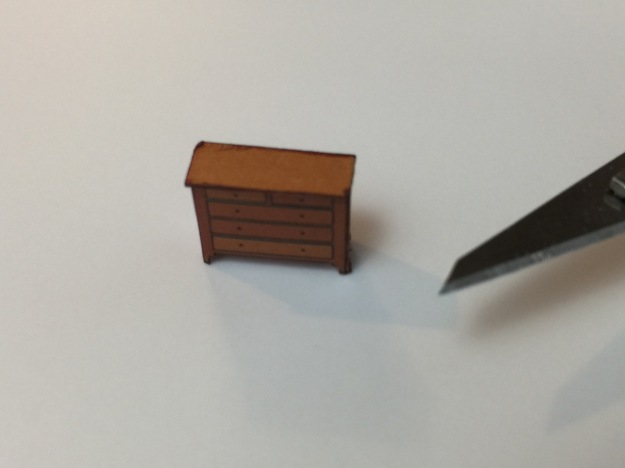 Here you can see some of the furnishings temporarily placed. Placement is only temporary since I need to be able to place the cannons, and I haven’t decided how I’ll do those yet. If I actually build this in a shipyard launch ways configuration, I don’t think the guns would even be placed yet. Of course, neither would the interior furnishings. So, clearly, I have some thinking to do on this subject. 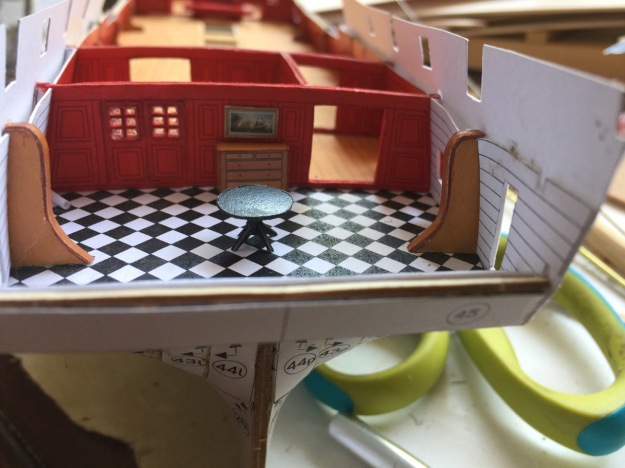