With another ship modelers’ get-together coming up again in just over 3 weeks, it’s time to take a look at our group project, the Amati Swedish Gunboat. Still, nobody has finished their model, but three of us are in striking distance of completion and I’ll be wrapping up my project in the next couple months.

I was partly inspired to finish up this model after seeing photos of the model built by ship modeler Junichi Yamashita of the Japanese ship model society The Rope. The model was beautifully done and was part of the society’s 42nd annual exhibition. Below are just a few photos of this nicely done model, courtesy of The Rope. 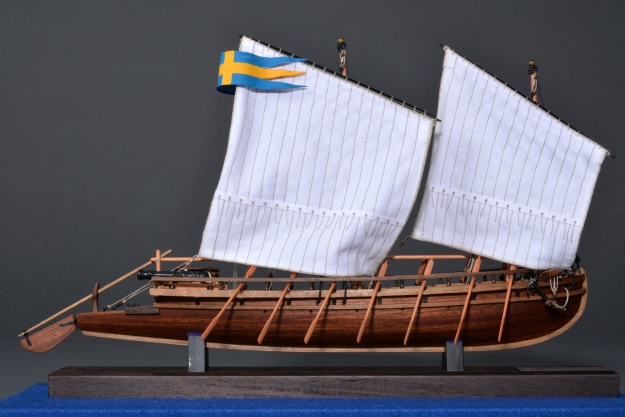 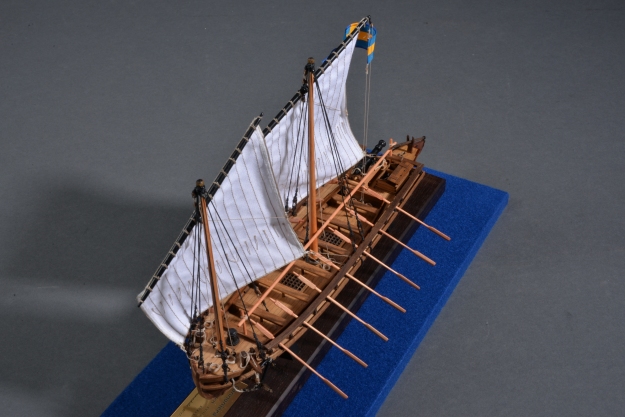 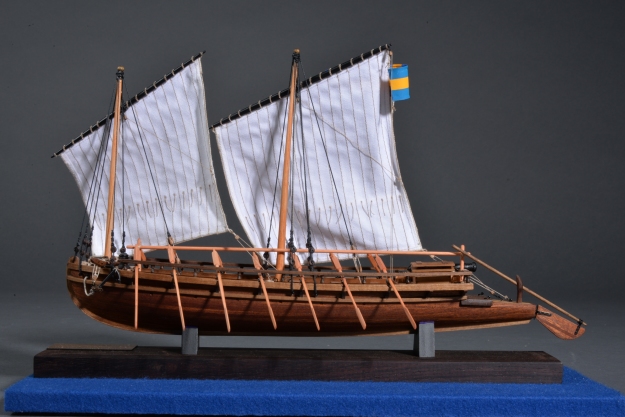 You can see more photos of this model on their website:

Just scroll down the page to model entry 42-18 and click on the photo.

On my own model, I began by drilling out the scuppers, the locations of which are shown on the plans. I was very careful regarding the angle I was drilling the holes, since the bottom of the wales rides a little below the deck.

After that, I moved ahead on the addition of the rudder. As I mentioned last time, the kit has the rudder dropping down into the water, which might make sense to a ship modeler. But, the museum models show the rudder is like a fin that runs straight back behind the boat.

I flattened out the angle of the leading edge of the rudder somewhat, but I ended up making a more conventional hinge than what these boats seemed to use. I ended up with one strap on the rudder and one above and below it on the gunboat’s tiny transom. A pin runs down through all three rudder straps, making something a bit like a cabinet hinge. It’s not quite what you’d expect on a boat’s rudder, but then again, it’s not a conventional rudder. I have an idea of what the actual hinge looks like, but I’d really like to get a closer look at the museum models some day to confirm my suspicions. 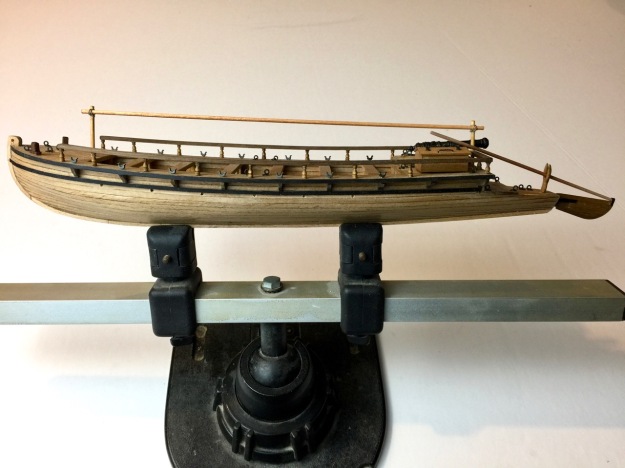 I used simple brass strips for the rudder hinges, and a thin 0.020″ brass rod for the pin. I painted all the metal work black. I made a small loop of a brass strip at the very end of the rudder to take the tiller. The kit includes a forked tiller rest made from walnut, which I think would have also served to provide leverage as a pivot point for the tiller. 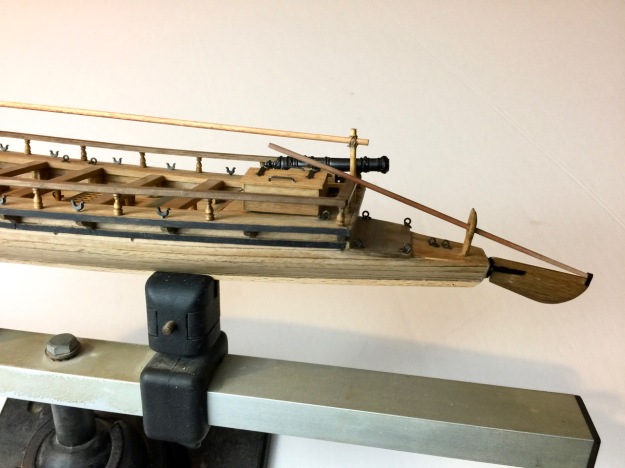 Moving on to the bow of the boat, here’s another place where I really did diverge from the kit. First off, the museum models show a small pivot gun that looks like it’s basically just a small anti-personal gun, though I’m just guessing based on its size. This kit has no feature of the kind. Instead, it has a little capstan behind the foremast. Since the museum models don’t have such a feature, and it seems like it wouldn’t work very well anyway for hauling up an anchor, I left the part off my model.

Also, the kit includes a pair of strange looking catheads. Instead of using these, I simply added a pair of posts which would aid in the handing of the anchor cables. These are roughly based on the similar items that appear on the museum models. 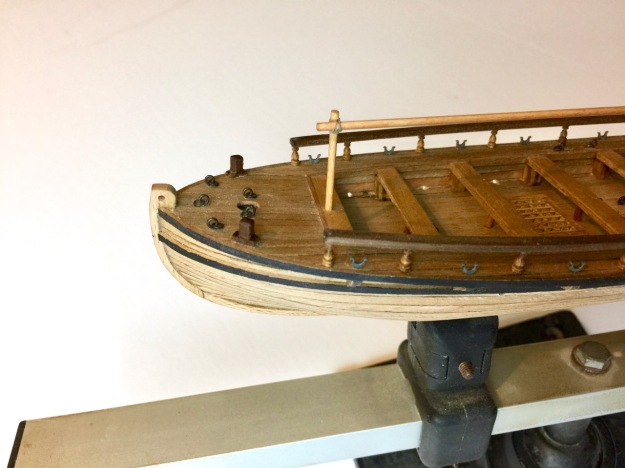 You can take a look at one of the museum models I’m using for reference here:

Finally, I’m now looking ahead at the rigging and the sails. I haven’t decided yet if I’m showing sails in full or furled. In any case, the model plan show the seams of the sail to be only about 12″ apart in scale. Sail cloths are usually 18-24″ inches wide, so I’m thinking I’ll go with the latter measurements. Sail cloth material is included, but I’m considering trying to make mine from silkspan or paper.

These updates have been pretty far apart, but I think the next one will probably be coming next month, so stay tuned.