David Antscherl’s series of books on building a “Fully Framed” model of the British sixth-rate sloop of war Swan, or one of her sister ships, is know to ship modelers everywhere as the definitive guide to building a plank-on-frame ship model as a miniature replica down to the last bolt. The series, published by Seawatch Books, has seen revised versions of the first two books in the series. And now, there is a revised version of the fourth book in the series, which details the rigging.

The book is not only revised, but it has been expanded to include a section on making and installing a full set of sails. The revised version is available for $70 plus shipping from Seawatch Books. 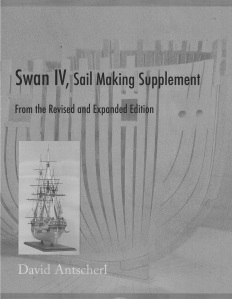 For those who already have the original version, a 16-page supplement has been published which includes the full text on sail making. The supplement is only $7 plus shipping from Seawatch Books.